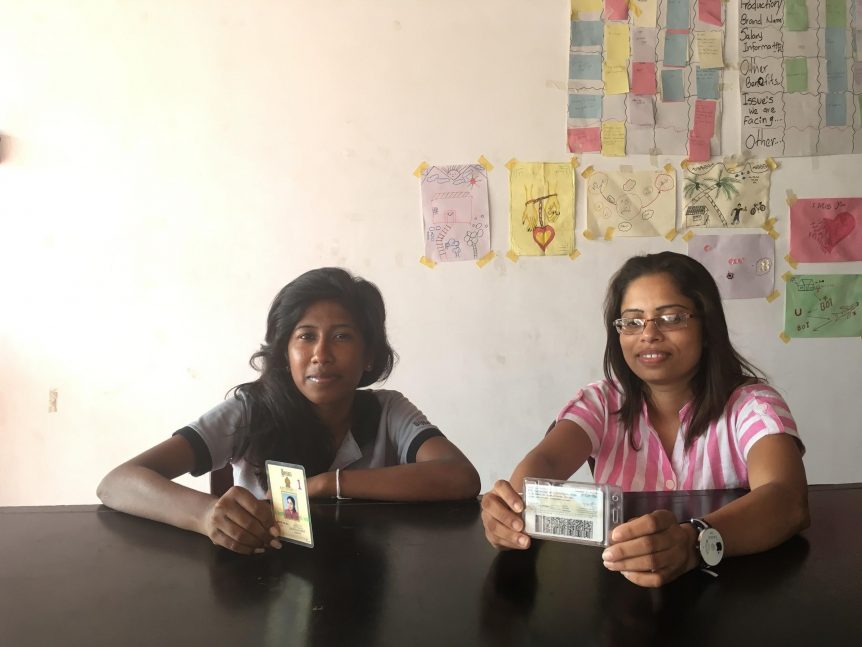 Following our research in Bangladesh, we conducted fieldwork in Sri Lanka to explore the role of ID in both enabling low-income women to access a wider variety of income generating opportunities and to retain and control their own income, as part of the Commonwealth Identity Initiative.

We spoke with more than 80 people (mostly women) in and around Colombo, including domestic workers, garment factory workers and online workers. We also interviewed employers in these three sectors and development experts.

This blog shares our overall thoughts as well as video interviews of 3 women working in these sectors: Navodika, Sarah and Tilakeshwari.

More detailed blogs on the role of ID for women in the domestic work, garment factories and online sectors in Sri Lanka are available on Caribou Digital’s Women, Work and ID page.

ID ownership, including the National ID card, is widespread among women in Sri Lanka

By and large, Sri Lanka is a country where ID does work for women to the extent that access and ownership of ID credentials is prevalent in Sri Lanka, with both high birth registration (97% - according to UNICEF’s 2017 data) and high National ID (NID) enrollment (95% of men and 90% of women according to the World Bank’s 2017 Findex survey). Almost everyone we interviewed in Colombo and the outskirts had their identification credentials, though we acknowledge this might be different in other parts, especially the post-war north and east of the country.

ID is widespread in Sri Lanka thanks to a robust registration system, supported by schools and the village councils (Gram Sevakas). The NID enrollment occurs at age 16 when students sit for “O-level” school exams, though obtaining the NID is not linked to passing the exam itself.

The government is also moving towards smart IDs, which have a machine readable barcode in addition to fingerprinting. Some of the women we spoke to had heard about these and a few had them, though the majority still had paper, laminated IDs (see photo above of Navodika and Rangala, two factory workers with both types of ID).

ID ownership does provide more security (for example, in domestic work, both for the employer and employee) but also provides room for women to consider choices in terms of what type of work to choose. Many domestic workers we spoke with defined domestic work as a “better work” option compared to factory work, because it gave them flexibility (e.g. in terms of work hours and leave). This was in contrast to Bangladesh, where many domestic workers we spoke to felt that was the only option as they did not have an ID and did not feel educated or skilled enough) for “better work”. This flexibility was considered a priority for those women, especially once married and after becoming a mother, even if there is no contract or benefits. The fact that they had the NID meant that that first critical requirement to access work was not an issue to overcome. Tilakeshwari speaks to that choice:

“I have a baby and need to look after her...she is only 2 ½ years old. I can send her to daycare until 1pm, so domestic work is the best option for me.”

Ownership of the NID (from the age of 16) does not protect under-age workers as some formal employers, such as factories, still allow under-18s to work, despite seeing their age on their NIDs. Though the factories of Sri Lanka appear to be more regulated and strict compared to those of Bangladesh when it comes to ID requirements to work, respondents such as Navodika, shared various workarounds. We should be particularly concerned about recruitment agencies as loopholes - some respondents said they keep fake IDs to get around ID issues when a girl is under age or does not have an ID:

“When the agency officials found out that I didn’t have one [National ID card], they used to give me someone else’s and send me for [daily] jobs”.

Although formal banking is widespread[1], enabled by a strong ID penetration, many women we interviewed still use informal methods to save and take loans, as Tilakeshwari’s video illustrates. These informal services do not always require ID, e.g. borrowing and saving through friends/neighbour groups (“seettu”) or pawning of their jewelry but are what women are used to and find most convenient.

Similarly, whether domestic, factory or online workers, most of the respondents still relied heavily on cash. Mobile money services were not commonly used for payments for a range of reasons both cultural and practical (though not because of the lack of ID) such as the need to go to an agent, the fear of hacking or making a mistake, the concern of using data or even that the fear that the husband may think they are using the phone too much. Even online workers, i.e. small entrepreneurs promoting their products and services online, used cash on delivery methods, instead of mobile money or bank transfers for payments.

[1] We note that this reflects the situation of Colombo and outskirts only, as it may differ elsewhere in the country.

Those women who use bank services tend to be those with higher incomes, such as Sarah (see video interview below) who advertises her hair oils online. Though she still gets paid cash on delivery for her products, she then deposits money into a bank to save and gather interests. Her story highlights ID is a critical stepping stone to build a formal business and grow profits, but she does acknowledge the role of others who helped her access online work which is as important a factor as having an ID.

Hélène Smertnik is a consultant for Caribou Digital, focusing on digital identification and gender. Her expertise is field research and advocacy around the adequate use of technology for socio-economic impact in emerging markets.

Savita is a Research Director at Caribou Digital with fifteen years of experience on user research in digital development, ranging from gender and access to mobile technology to the identification of marginalized/vulnerable populations in a digital age.